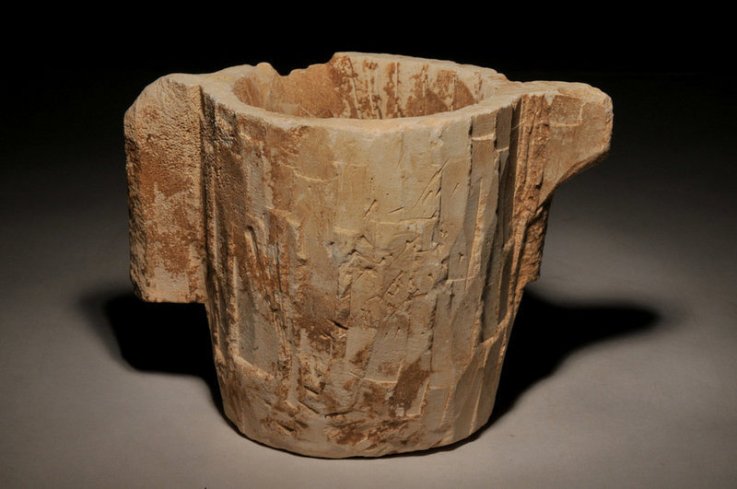 Measuring cups made of limestone, apparently used for ceremonial washing of hands. 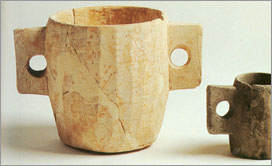 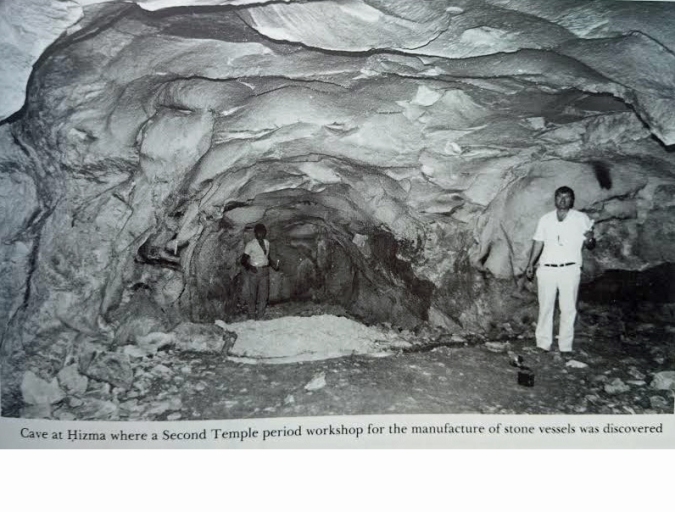 Jerusalem as a Center of the Stone Vessel

Industry during the Second Temple Period

Vessels made of stone have always occupied a prominent position among the artifacts used by man. Such vessels were used mainly for grinding and pounding, and were fashioned of hard limestone or basalt. The material culture of the Second Temple period was marked by the appearance of a different type of stone vessel, made of chalk (a soft limestone). The presence of these vessels mainly in characteristically Jewish areas, such as Jerusalem, Judea and the Galilee ; their absence generally from non-Jewish areas ; and their sudden disappearance after the destruction of the Second Temple and the Bar Kokhba Revolt suggests that the stone vessel industry during the Second Temple period was a distinct Jewish phenomenon connected with Jerusalem and the Temple, Jewish religious law, and the Jewish population (PL. Vif).

Materials and Worshops for the production of Stone Vessels

Stone vessels were made of both white and bituminous chalk. The former type of stone is abundant in the eastern part of Jerusalem, from Hizma in the north to Beit Sahur in the south. Local kakula and nari limestone was also used at times for the production of stone vessels such as ossuaries. Bituminous chalk quarried in the Nebi Musa area in the Judean Desert was used mainly for the manufacture of stone tables.

Workshops for the production of stone vessels were concentrated in Jerusalem and its environs. Evidence of such workshops was found on the slope of the Ophel south of the Temple Mount and in the City of David in Jerusalem. Apparently these workshops employed heavy-duty lathes for the production of such items as large vessels and stone tables. The manufacture of small vessels, mainly « measuring cups » (see below) was carried out at the stone quarries outside the city. Such a workshop for the production of stone vessels was discovered in 1968 in the Abu Dis area, east of Jerusalem. In this workshop small vessels were produced on a lathe. Vessels that had been discarded as faulty while they were being made, as well as cores – the material removed from inside the vessels by turning – were found in Bethany. This discovery on the Mount of Olives attests to the presence of a stone vessel industry there as well. A workshop for the production of stone vessels was also discovered in Galilee, near Reina, on a chalk dome 6 km, north of Nazareth where measuring cups, and apparently also other small vessels made on a lathe, were produced. The largest quarry-based workshop found until now is located in the village of Hizma, the biblical Azmaveth, north of Jerusalem. A number of caves used as stone quarries, and a workshop for making stone vessels were discovered on the northern slope of the village. The dimensions of two of the caves are, respectively, 38 x 26 m. and 33 x 8 m. ; another cave, used as a water cistern, measures 8 x 7,5 m. In the early 1980s, two excavation seasons were conducted under the direction of the present author in one of the Hizma caves. The excavations revealed archæological deposits, 5-6 m. thick, containing stone chips. Tens of measuring cups that had been damaged in the various stages of working, stone cores extracted on a lathe, and various small latheturned vessels were uncovered. Also found were metal vessels and iron cutting tools such as knives and chisels for separating stone blocks, and a large quantity of pottery vessels of the 1st century C.E. – jars, cooking pots, many oil-lamps, and painted bowls. The pottery vessels are of good quality and were probably made in Jerusalem.

Two main methods of production can be discerned in the stone vessel industry : manual and lathe work. The manual manufacture of vessels obviously predated the latter, although vessels made entirely by hand continued to be produced also after the introduction of lathes. Mallets, chisels and gouges – tools used for making wooden vessels – were employed in the production of varied types of stone vessels, fashioned both manually and a lathe.

Stone Vessels Made Entirely by Hand

Working the stone by hand gave the craftsman a great deal of freedom and therefore this group of vessels comprises a broad range of shapes. Three main types of objects were produced in this way : ossuaries ; tables ; and small vessels of which the most prominent are the measuring cups. The methods of making and decorating assuaries for secondary burials were identical to those of the other stone utensils. The ossuaries were fashioned manually with mallet and chisel from preshaped rectangular blocks, and ornamentation was chip-carved or incised in the stone – techniques obviously derived from woodcarving since the chalk lends itself to similar treatment (see in this volume, pp. 191-205). The tables are rectangular with a single, central leg in the form of a column, that was sometimes turned on a lathe. The ornamentation on the edges of these tables, which imitated imported stone, marble, and metal tables, in some cases resembles that on the ossuaries. Among the stone used for making tables is white chalk, gray-black bituminous chalk, and harder limestones. Measuring cups in various stages of working were found in all the workshops discovered so far in quarries. In the Hizma caves we found dozens of measuring cups that had been damaged while being worked, enabling us to reconstruct the production process. After the chunk os stone to be worked was detached from the rock, it was given the basic shape of the vessel with mallet and chisel. The next stage entailed hollowing out the vessel with mallet, gouge and chisel. Judging from the finds, many vessels must have been damaged at this stage of the manufacturing process. Finally, the outer surface of the vessel was fashioned with a fine chisel, no effort being made to smooth the chisel marks on the sides of the vessels. Vessels other than measuring cups made in this way include mainly square bowls with rounded corners and ledge-handles in the rim.

The handmade stone vessels comprise a large and diverse group. As mentioned above, three distinct types of stone objects were made by hand : ossuaries which constitute one of the dominant types of products in the entire stone utensils industry ; measuring cups ; and rectangular stone tables with a single central leg (monopodia).

The measuring cups are of unique shape, probably in imitation of wooden cups, and appear in different sizes – with one, but sometimes also with two handles. Scholars have regarded them as measuring vessels, hence the name « measuring cup ». However, this determination is erroneous ; a few such vessels may possibly have been used for measuring, but basically this was the common household cup in use during the Second Temple period – also for the ritual washing of the hands. To this group of handmade stone vessels may be added square, handemade bowls with ledgehandles in the rim of the vessel.

During the Second Temple period strict attention was paid to the laws of ritual purity. According to the Tosefta, « purity broke out amoung Israel ». Strictness regarding ritual cleanness was not limited solely to the bounds of the Temple, but spread throughout the Jewish communities. The laws of ritual cleanness had far-reaching influence over daily life and on the material culture. Definitions of cleanness and uncleanness are of biblical origin (cf., Leviticus 11 : 33 ff.) and during the Second Temple period they were expanded and discussed in detail in the Order Tohoroth in the Mishnah. Due to the strictures governing ritual cleanness it was more worthwhile to purchase a vessel which could not become unclean, for once a vessel became ritually unclean it had to be taken out of use-especially a pottery vessel, which had to be broken. As a consequence of this halakhic precept of strict observance of the purity laws both in and outside the Temple, a stone vessel industry began to develop in the Second Temple period. According to the halakhah, stone and earth do not become ritually unclean : « All the utensils that were in the Temple required immersion, excepting the altar of gold and the altar of bronze, for they were reckoned as like to the ground. So R(abbi) Eliezer. But the Sages say, Because they were plated (with metal) » (Mishnah, Hagigah 3:8).

Distribution of the Stone Vessels

The Date of the Stone Vessels Industry

Determining the beginnings of the stone vessel industry poses a difficult problem ; their disappearance is easier to establish, due to its connection with the destruction of the Temple in 70 C.E. In sites clearly belonging to the Hellenistic period, no stone vessels were discovered, nor were stone vessels found in the Hasmonean palace in Jericho. We may thus assume that stone vessels first appeared in the second half of the 1st century B.C.E., while their main distribution occured in the 1st century C.E.